For the last year or so, Space has slowly been creeping it’s way into every facet of my life.

It started when I picked up a pair of Celestron binoculars on a whim. They showed me things I had never seen before: stars in beautiful hues of blue, red, and white; stars that change color when they twinkle, the moons of Jupiter, the Orion Nebula, and amazingly detailed craters on the moon. When I turned 30 later that year, Paige turned my new fascination into an outright obsession by buying me an Orion 8″ Dobsonian telescope.

My eyes were suddenly opened to the entire universe, as I started first in our own solar system: I saw the planets Jupiter and Saturn in glorious detail and color, the red disc of Mars, the beautiful crescent of Venus, and surprisingly even more beautiful detail on the lunar surface. Traveling outside of our solar system, I decided to go on a hunt for all 110 of the objects on the Messier object list, which contains several famous Astronomical objects, such as the Orion Nebula, the Andromeda Galaxy, and much much more. In fact, I am still on that hunt today, and have logged well over half of that list.

The Orion Nebula as seen from a 8″ newtonian telescope

With my enthusiasm for amateur astronomy growing by the day, and my curiosity of space at an all time high, I decided to start listening to the entire back archives of the AstronomyCast podcast. The more I learned, the more I wanted to learn. I found myself taking part of an online introduction to Astronomy course, learning the math, and even passing a few of the tests!

As my Facebook profile started to fill with links to space articles, my Mom forwarded me a Youtube video of a man sending his son’s toy train to “near-space” in a weather balloon. The video was so inspiring, and so touching, that I knew I had to do the same. After a few months of toying with the idea, and reading as much as I could find about the subject, I decided I would take the plunge.

This project is still a work-in-progress for me, and I intend to blog more about it in gory technical detail very soon.

Then, one day, as I was reading through my science news feeds, I found a particularly interesting post about a space startup called NanoSatisfi. In a nutshell, the company plans to disrupt the the space industry by deploying Arduino-based satellites with sensors and cameras, and then allowing anyone (students, researchers, hobbyists) to send their programs to these satellites through a modern web browser (at a nominal cost, of course). This idea had me really excited, and particularly this paragraph at the end of the article sprung me into action:

For those interested in working with NanoSatisfi as an employee, advisor, or investor—contact Peter Platzer at peter@nanosatisfi.com. Platzer says, “Talk to us now, not in three months…things are moving fast!

This was too good to be true. A space startup building a software platform, and they were looking for people! After reading this article, I quickly fired off an email to Peter, telling him why he needed to hire me. Peter responded promptly, and after a few exchanges, I started building a prototype web-based control center that showed a satellite orbiting a 3d earth in real time. This apparently impressed Peter enough that he wanted to start talking about employment!

As of this week, I have officially joined the startup NanoSatisfi full time, working on making space exploration accessible and affordable to everyone through our Arduino-based satellites. For now I am primarily writing software for the payload (Arduino) and on-board computer systems of the satellite, the ground station, and the web-based control center. We will be sending our first satellites to orbit this year, and I can’t wait to write more about it! In the meantime, check out this pretty rendering of our first satellite: ArduSat-1 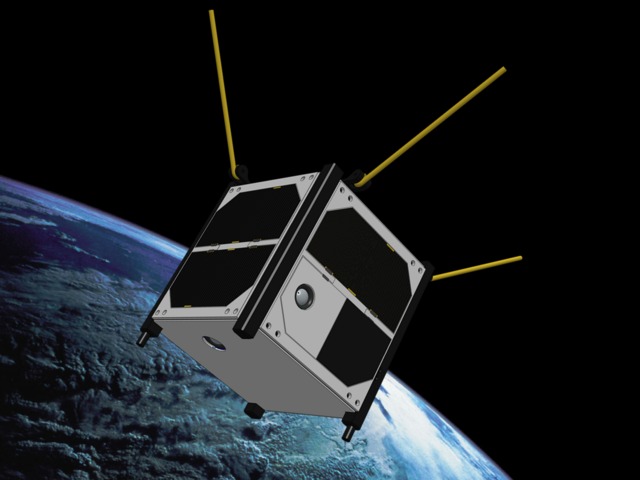